Paradise City Northampton is this Weekend 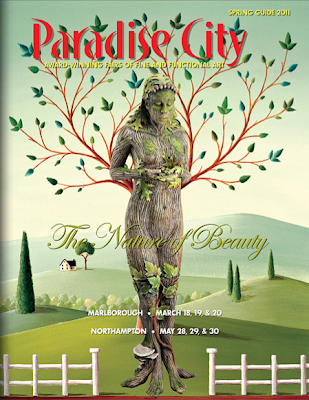 The studio is a mess. I've been scrambling to finish up all the hats that I started. I was thinking that I wouldn't have much to show because I had spent a good chunk of time working on some collages (see previous posts), but it wasn't as bad as I thought.

Yesterday my photographer came to take pictures of the latest works, which meant I got to see the big pile I had made. We started around seven o'clock and didn't finish until a little after midnight. Of course we were talking about all kinds of stuff while working—he's youngish and still has a lot to learn about life. Uhh, I sound so old!

So Paradise City is this weekend. After this, I won't be doing any shows until the fall, so if you need something from me come out to the show or make an appointment to come visit me in my studio.

I resisted making felt all winter (except for commissions), so I have lots of straw hats to show. And so many cocktail-style hats. I don't like the term "fascinator", I'm not sure why, maybe it's because the word makes me picture people looking at the hat, dumbstruck and oblivious to the wearer. I don't like that so much—the hat should embellish the person wearing it.

If you're around Northampton this holiday weekend, and you think you'd like to get a little hat fix, please stop by. I'll be in booth 711 in the Arena Building. Come tell me what you think of my work.
Posted by Denishé at 2:14 PM No comments:

Denishé at the Royal Wedding?! 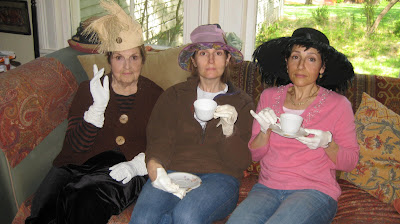 Well, my hats didn't exactly make it to the official Royal Wedding, but a good customer (and friend) had a royal-wedding party, and she took my hats along. She was gracious enough to send me a photo.

I can't take credit for the hat in the middle, but the two on the ends are Denishé hats.

The merry makers got up early, wore white gloves, ate scones with clotted cream, and even had a small figurine of the Queen Mum present. Sadly, the Queen did not survive the festivities very well—her head was accidentally knocked off in the excitement of the moment. Perhaps that's a sign of good luck?

Did anyone else out there wear a Denishé hats to witness the event? If so, send along pictures.
Posted by Denishé at 5:48 PM No comments:

Last week I babysat my six-year-old friend, Alex. He and my daughter were playing together for a good while—dress-up, forts, flying balloons, and an electric typewriter. I left the playroom to go use the bathroom, but when I came back, Alex sweetly handed me a little piece of paper, cut small enough that it could have been the message in a fortune cookie. Thanks Alex.
Posted by Denishé at 9:38 AM No comments: 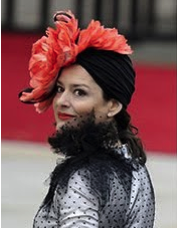 There were a few wedding hats that I really liked quite a bit. I can't be too critical, it's not like my hats were invited. But there really were some beautiful presentations, where the milliner obviously worked with the wearer and her wardrobe to come up with the right piece.

I'm not one to bother with names, so you'll just have to enjoy the pictures. Could these be any more delightful? 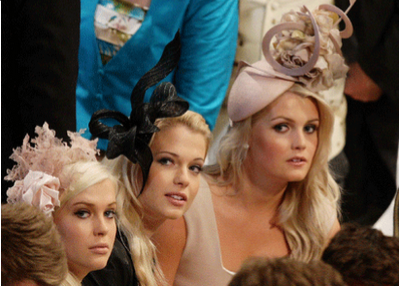 Rape of the Sabine Women 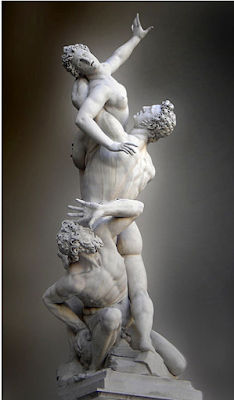 I saw this sculpture "Rape of Sabine Women" by Giambologna in Florence. There are no words to describe the artist's ability to render flesh. In a search for something else I came across this detail image and felt compelled to share it. This is marble. This is what an artist can do. 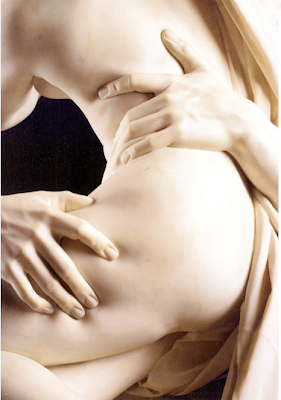 Posted by Denishé at 7:11 PM No comments:

This was a good listen for me today.

Posted by Denishé at 5:04 PM No comments:

I applied my first coat of gloss varnish to Pinocchio, so I've decided that it's officially complete. 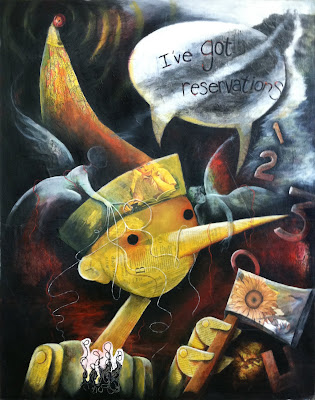 What can I say about it? I learned a lesson that I always seem to have to learn—that less is more. There were many more elements in this piece in the beginning than there are now. I don't think knowing that changes the way I would work. All of the elements I put down are still important to me on some level, and on some emotional level, they still exist for me. There was a lot of pushing and pulling of the winged creature on the left—also important, and definitely not a mistake. She was trying to figure out who she was. Adding the strings seemed to be really important.

Symbolically, what do we have? A wooden puppet who just wants to live a normal life and have the things we all take for granted. Like all of us, he seems to have an angel and a devil perched on either side of him—the never-ending battle. And he's got reservations—originally everyone did (there were more speech bubbles). We've all got them, though, don't we? I've got reservations—it's my nature. Now the axe... Still not quite sure about that, but he's offering it up. He's saying, "Here. Go ahead and take this axe. I'm made of wood."

And there you have it, another collage done. If you're at all interested, here are most of the steps that I made. I left some steps out because they were so small that most people wouldn't even notice. Funny how big that first step is from trashed-college painting to first application of Pinocchio. But you can see that I stuck with my first basic sketch. 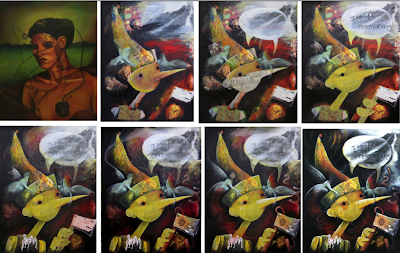 I hate having to remember famous peoples' names, but I'm looking into this one for you. Princess Beatrice. Everyone is talking about that one. Should I bother? Sure, why not? 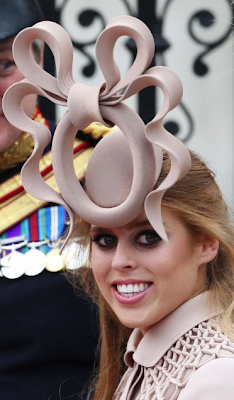 Phillip Treacy is an amazingly talented milliner. His work often borders on sculpture, and can take a runway to a level unattainable by the clothes alone. He made Beatrice's hat.

Look at it as an object—it is a lovely little thing. Personally, I don't like hats that are designed to sit in the center of the forehead—they draw too much attention to the hat and not enough to the wearer. But the shape is extraordinary in its perfection, and Treacy can get away with making that kind of art-headwear.

Beatrice made a mistake in not wearing her hair up—having it down made her look less polished than this very polished work of millinery. Picture it. I think the scale is off—it needs to be about 15% smaller. Her severe features are accentuated by the crisp edges of the hat—something softer would have been better. Also, I'm imagining this "cameo" shape on the back of her head rather than the front—that might have eased the look.

Me?, I'd love a chance to wear this hat in public—it's kind of fun to watch people freak out, and that's just what everyone is doing. She's in the headlines. She'll be interviewed. Phillip Treacy had a willing canvas to sport one of his more-challenging designs, so he went with it. Even bad publicity is publicity.
Posted by Denishé at 2:42 PM 3 comments:

I suppose I would be remiss if I didn't mention the royal wedding. There, I did it.

But seriously, I've gotten so many questions and comments that I suppose I have to talk about it. I did see the ceremony (thanks to a good friend recording it for me). Yes, the hats were wonderful to see. Some I loved, others I disliked (I won't say hate). No, none of mine went—my clientele didn't get the invitations.

When I have a bit more time, I'll comment on a few in particular that caught my eye, for better or worse.

I do have to say that it irritates me to have people ask me if I'm wearing a hat because of the royal wedding. No, I just wear hats. I like them. Period.
Posted by Denishé at 3:48 PM No comments: