I've been in the studio working this week—something I love to do. Unfortunately, this work has been bittersweet for me. A family member—a nine-year-old child—has an inoperable brain tumor. I have my own little girl now and the thought of their daughter's struggle is painful.

We've been lucky—the family has been keeping us posted via the site Caring Bridge, so even though they're miles away we know what's going on without having to ask. M began losing some hair some weeks back and started getting a little self conscious about it. When I read that I thought, Well, there's something I can do something about. So I began my journey into making hats for a girl who loves pink. 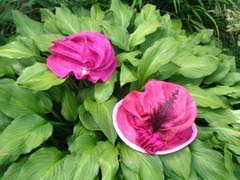 I finished them up today, put them in a pretty pink and black hat box, and got them to the post office as fast as I could. I hope they'll bless me with a fun fashion photo shoot, but in the meantime, here are a couple of the hats that I sent along. I hope she loves them.
Posted by Denishé at 9:13 PM 2 comments:

Gifts from My Garden 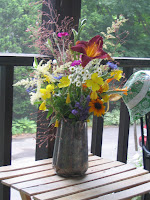 I have a lovely perennial garden. I work hard to keep the weeds away, but other than that, it has to fight for itself. I don't feel like I ask much of it, just that it survive. Heck, I almost never pick it's lovely flowers. But I have a little girl now and I want her to be surrounded by the beauty of the garden.

Yesterday I picked a bouquet and placed each flower into an old and tarnished silver pitcher, telling my daughter the name of each bloom as I poked it into place: Rose Campion, Rudbekia, Fever Few, Astilbe, Bachelor Button, Day Lily, Sun Drop, Coral Bells, Lavendar, and Hosta (for some green).

A. knows to be gentle with the flowers. "They are just babies," I tell her. Of course I let her dig her little fists deep into the scented geranium and the peppermint—those can stand that much toddler love. "Jimanium, Ruhbetia" she says.

When our time in the garden is up we pull off our gardening boots and let them collapse all over each other by the back door.
Posted by Denishé at 10:08 PM 1 comment:

Where are all the men in hats? 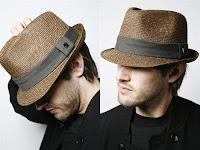 Often when I'm out wearing a hat, older gentlemen will come up to me and whisper, "I wish women would wear more hats." I usually agree with them and then add that I wish men would do the same. Most men over forty-five have a hard time with wearing hats—it's an emotional thing, something they associate with their fathers. And fathers are old, right? They don't want to be old.

Well, I'm hear to tell you that the fashion of men wearing hats is happily on its way back. I'm not talking about baseball caps or knit hats, I'm talking about the real thing—hats with brims, fedoras, trilbies, all the good ones.

While traveling in Europe last year I saw several younger men wearing stylish head wear. The word "saw" is key in that sentence—I wouldn't have seen those men if they hadn't been wearing hats. They would have just belonged to the great sea of bodies that were at the beach or walking through the airport. But I saw them. Some part of me wanted to walk up to each of them and shake their hands, let them know that they looked good. Another part of me wanted to find out where they bought them—nice mens hats can seem so hard to come by these days. In the end, I stayed away—you can't just go walking up to strange men in the airport and telling them you like their style. I doubt they're tuning in here, but let me just say it for the record—gentlemen, you looked fantastic.

So men, young and old alike, go into your grandfather's or father's closet, go to a hat shop, go to a flea market, buy one on ebay—go get your hat on! It's time.
Posted by Denishé at 8:58 PM 2 comments: