A Hat in Bloom: Part I

I know that my postings have been spotty. Being a new mother is amazingly difficult. I guess I knew that before, but there's a difference between knowing and understanding, it and feeling it.

Getting to the studio has been difficult—I've already mentioned that in an older posting. But I have been getting in once in a while. Not as often as I'd like, but at least it's something.

These past few weeks I've been working on a commissioned hat for a Boston garden party. I was shown the dress and asked to come up with something appropriate for it. I'm including the sketch. Hopefully it will be just what my client wants.

So far the hat is in pieces at my studio. It has a buckram foundation, covered in straw, with parisisol and sinamay embellishments.

I'll post again with the finished hat. Let me know what you think—even criticism and suggestions are welcome. 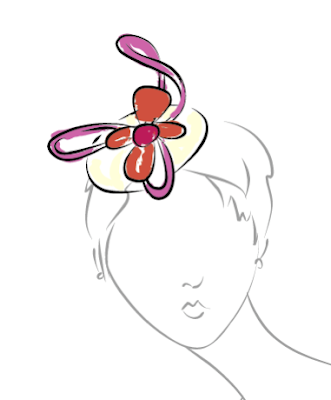 Posted by Denishé at 2:08 PM No comments: