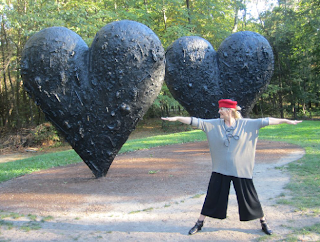 I sold some hats at Open Studios this weekend. It's always nice to meet people who appreciate my work—it gives me the fuel that I need to keep making.

One hat sale this weekend was to Ania. She loved a hand-sculpted red beret that I had just made a few weeks before. And it looked so nice on her.

What was even nicer was that she liked it so much she sent me this great picture of her in the DeCordova Sculpture Park. What a great and happy shot! Thank you Ania!

If anyone else wants to send me photos of them in their Denishé hats, I'd be happy to post them.
Posted by Denishé at 9:09 PM No comments:

The Hat that Went to France 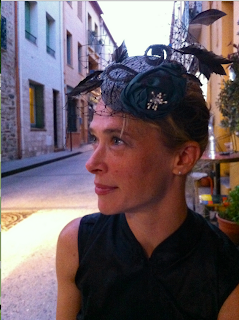 Here is a lovely photo taken in France of one of my recent commissions. Doesn't she look divine? I want to go to France! 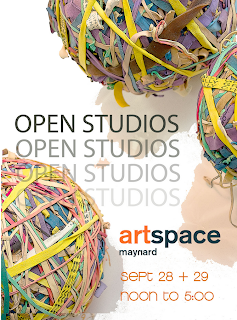 Time to head to Maynard to check out Open Studios. I'll be there with my latest hats for you to try on and give me feedback.

As I've been recovering from major surgery that I had last November, I've been figuring out how to make getting the work done a little easier. I'm still a little clumsy, so don't trip me up!
Posted by Denishé at 7:53 PM No comments:

"Standing on the Edge": the process

I've been working on a painting since about June. As usual, it has been a long and complicated journey. There have been various titles running around in my brain, but the piece has managed to get itself named. Back in the fall I was part of a storytelling event with a writers' group I belong to (Souled Out Artists). They suggested using my then-incomplete collage for the graphic on the program. Since I feel like my collages are really just visual stories, I was happy to do it. And so it's called Standing on the Edge—which was the name of the show, which ironically got its name when one of the writers suggested it from looking at the collage. It's like looking in a mirror at a mirror. So thanks Kevin for the title.

"I never walked near the edge, used to feel for the ledge."

I'll restrict my comments to talking about aesthetics and not about psychology, though I love hearing the stories that people see in the work, so feel free to comment if you like.

I'm sorry that I didn't take a photo of the original piece-of-crap painting I was covering up, but it was of a bridge in a park in Worcester. I made it when was a sophomore in college. I probably didn't photograph it because it still embarrassed me.

You'll have to forgive the conditions in which the photos were taken—I wasn't always painting in the studio, so the lighting varies. Still, you get the idea of the elements that changed. In watching those elements, you can see where the the struggle kept happening—the collage seems almost unchanged but for these two or three spots on it. I wanted to pull my hair out.

These frames show the major changes in the project. They don't include the final piece. I'll put that into another post because I haven't photographed it yet.

Here are a couple of outtakes so you can see more details and a faster progression. 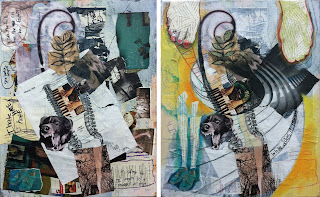 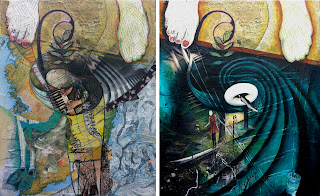 Okay, I'm a bit sentimental—I'll admit it. Around here we've taken to loving Death Cab for Cutie's I'll Follow You Into the Dark. It's mushy, it's gushy, it reeks of sappiness. I love it. I saw on iTunes that there's a video, so I decided to check it out—it sealed the deal. I love to draw. I love drawings on impractical paper. I love stories. It's all right t here. What are these people trying to do with this heart-wrenching love song, kill me? If you've not heard it yet, here's a link. I think it will be on this family's playlist for a while—probably until the end. I'm such a sap. Somebody shoot me.
Posted by Denishé at 5:03 PM No comments:

What I've been up to

You may have thought I had fallen off the planet—no hat posts, not even a painting. What happened to the milliner from Maynard, Mass?

Oh, what a year 2012 was! There was just way, too much healthcare. In fact, by the time August rolled around, I thought I might explode if I had to pay one more copay. But in the early September I had an MRI of my spine (I have some various spinal cord conditions), and that MRI made my neurologist send me to my neurosurgeon in Boston. The neurosurgeon decided that it was time to clean some things up. So I spent eight days around Thanksgiving in the hospital—it was ok. My husband brought me a latté every day, and brought his laptop so that he could work and still be nearby.

I had similar surgery as a child, but I'm far from being a child, and I forgot how much it would hurt. Still, it ended and here I am. I'm still recovering—the neurosurgeon says that it will take 12-24 months for all the nerves to heal up—but every day gets a little easier. I'm in physical therapy two times a week and am both making progress and learning a lot! While in the hospital and when I got home, many of our friends and family pitched in to help us out with childcare, meals, you name it. I am so grateful for that—I was able to rest for a good period of time.

I haven't made any new hats yet, but I did get my last shipment of ten or so out to the Peabody Essex Museum before I went into the hospital. I've gone to the studio a handful of times, and in that time I've been working on a painting. I should be finishing that one soon, and when I do, I'll post images of how it progressed.

In the meantime, here's a link to a video of coverage of the Hats exhibit at the Peabody Essex Museum. Sorry I can't embed the video—you'll have to click on this instead: A Party on Your Head I still have to get myself out there one more time to see it again. 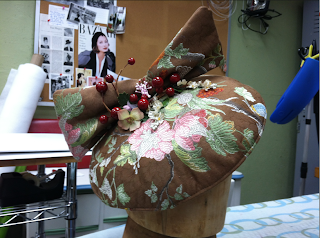 Linda Hartigan, the Chief Curator of the museum, who we see at the beginning of the video, bought one of my more interesting hats from the PEM boutique in the first days of the show. I felt honored to have it go to her. (The photo in this post is of the hat she bought. You may recall it from my February blog post Pretty Things). I love this hat.

Do yourself a favor and go see the show. You'll find my burgundy hat under glass in the American Gallery on the first floor.
Posted by Denishé at 3:08 PM No comments:

Here's a picture of my hat that's being exhibited at the Peabody Essex Museum in conjunction with their show on hats. My hat is part of the local show "Contemporary New England Milliners"(CNEM). I think there were four of us chosen to have hats in the show, but I can't say for sure.

Mine is the burgundy hat on the left. The hat on the right is by Sarah Havens. You can find these and the other CNEM hats in the American gallery. 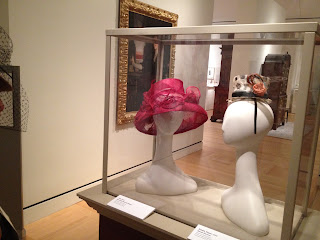 This has been a totally cool experience. Seeing my hat under glass makes it seem very important.
Posted by Denishé at 4:15 PM 1 comment:

Have you not seen it? 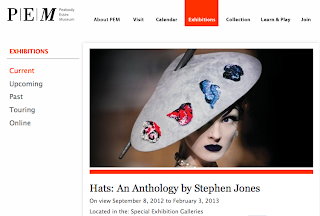 Oh dear, you must go to the Peabody Essex Museum to see their latest exhibit—it's all about hats! Old, new, decorative, funky—it's all there. There's eve a giant body hat—it covers the head all the way down to the knees!

I'm a lucky girl because I have a hat on display in a related exhibit, their "Contemporary New England Milliners" show. So funny to see one of my hats under glass and on display in a museum. Then you can go over to the shop and try on some of the hats that they have there.

If you're into fashion, put this on you list of things to see. The show will be up until February, but you should go early because you'll probably want to go back a couple of times.

Opening night reception was on Friday, and Stephen Jones, milliner extraordinaire, was on hand to talk about this exhibit that he put together. Here are a couple of shots I took at the event. 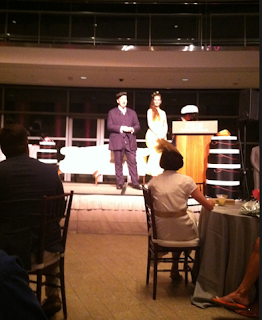 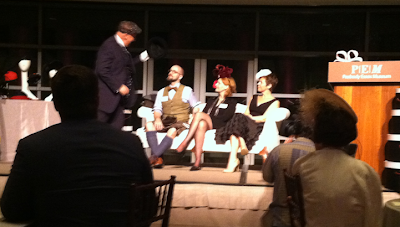